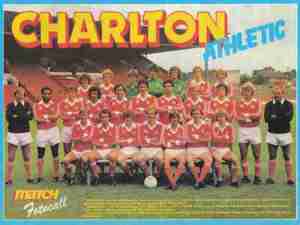 I head back again to London tonight and get to spend the day with my son tomorrow on his 11th birthday. However I think both of us are more excited about his birthday treat on Saturday.

I booked him in as one of the match mascot’s for Saturday’s game at home to Exeter at the beginning of the season and told him just a week or two ago. With the added exhilaration of there being a 20,000+ crowd at The Valley to run out of the tunnel to it will hopefully give him many memories to cherish forever.

I was talking to my brother the other day and exactly 30 season’s ago he was the match mascot (there was only one in those days) for a pre-Christmas match at home to Carlisle United. It was our promotion season but needless to say the crowd was a long way off 20,000. we think it was more like 5,000.

Anyway Charlton won 2-1, and my brother picked two favourite players, apparently so he was told, this had never been done before. Those players were a young Paul Walsh and the slightly more experienced Colin Powell who scored on the day to keep us top of the Division 3 table. The other Charlton goal was an own goal after Carlisle took the lead.

The Valley was a bit different 30 years ago even though my son will run out to the same famous song as my brother did three decades previous. My son has picked another winger in Scott Wagstaff as his favourite player and also selected a second as is tradition in Rob Elliot and my brother will join us on saturday so it will be a real family day out. “There’ll be no more sobbin’ when he starts throbbin’ his old sweet song.”

Before that on Friday night I will head over to see my Hornchurch mates and I’m really looking forward to seeing them for a few pints as it has been too long. Then I end this short trip with a stopover down on the East Sussex coast with my parents.