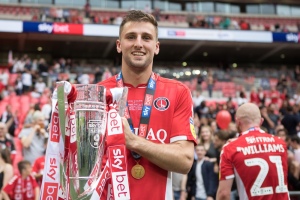 I’m quite sad about this, and his departing words brought a little tear to my eye. That goal at Wembley was of our greatest moments.

Prior to Ben Garner arriving we were led to believe that Purrington and his agent were in discussions to sign a new contract, so it could be that Purrington has a better offer or that Garner pulled the rug, whatever we are now even shorter on defenders as we start pre-season this week.

I always thought Purrington was a solid defender at this level, and had a real knack of appearing in the box late in goal scoring positions.

More than that Ben seemed like an all round good bloke, who I will remember fondly. Good luck in the future Ben.