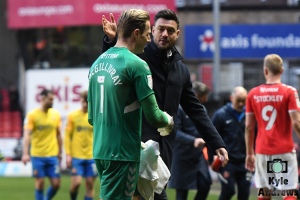 I’ll take that. A point and a clean sheet after 5 defeats and conceding 12. That was only our second clean sheet in 2022 and we needed it.

Today was a back to basics Curbs-like performance. Little inspiration but plenty of perspiration, the players put a shift in, we defended well, certainly rode our luck but stuck to the task and thanked MacGillivray for making good saves when called upon.

In fact we might have snatched it at the end when first Lavelle headed just over and Stockley shot wide when well placed with Lavelle sliding in but unable to get a touch. Sunderland fans would have enjoyed that.

Our friends from the north were easily the better side, it has been indisputable that in each of the last six games we have been a long way second-best underlying how much work has to be done this squad.

No denying that the players did put up plenty of fight today. Lee was better, Dobson was everywhere, even Gunter played well. Pearce at least gives us heart and direction and having Stockley back helped in both penalty areas. He looked pretty fit too, unlike Scott Fraser.

We do need Washington back if we are ever going to get a shot on target, Burstow was very poor, and he frankly is not ready for even League One. It’ll be interesting to see where he lands on loan next year, but that £1.6m in Thomas’ pocket does look like good business.

Conceivably a line drawn to move forward from. I hope we play with more confidence and purpose next Saturday.

Jacko: “It was a real battling performance built on hard work and spirit. There was some good defending and being resolute, which was obviously what we needed today on the back of a really tough run of fixtures and results.”