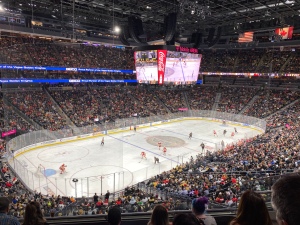 Up until 2017 the city of Las Vegas (pop: 640,000) didn’t have a professional sports team. AEG and MGM put pay to that building a new sports arena just off the strip and opening it in 2017 making it home to a new NHL franchise called Vegas Golden Knights, owned by Bill Foley. T-Mobile have stadium naming rights.

Since their existence the Golden Knights have qualified for the Stanley Cup playoffs in all four of their seasons and reached the Stanley Cup Finals in their first, losing to Washington Capitals.

Last night I was invited to the T-Mobile Arena to watch the Black Knights host Calgary Flames.

The razzmatazz was on full pelt – there was almost a full Vegas show before the players came out for the game – and the Golden Knights won 3-2 against the high flying Flames, who are top of the western conference.

Despite the teams relative league records, Vegas for 60% of the game were well on top and always ahead, and by the time Calgary came storming back the Golden Knights had a 3-1 lead to withstand the comeback charge.

There were just over 18,000 in the stadium, with many making the long journey from Alberta. I have to assume that if you are to travel to watch your team, and American pro sports teams’ fans are not known for it, then this must be the ultimate away game to go to.

Unsurprisingly the atmosphere was even more fabricated than normal inside the stadium, but it was an impressive arena, and I don’t think I have ever been in a corporate ‘box’ larger or more fancy. It was like being in a penthouse apartment with a huge terrace and a balcony overlooking an ice rink.

Sadly I missed the opportunity to watch an American Football game at the barely year-old Allegiant Stadium home to the now Las Vegas Raiders NFL team. A piece of sports stadium art just on the outskirts of the strip.