Run down the wing for me 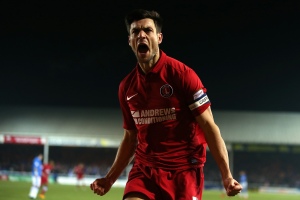 Jacko has made no secret of his desire to manage Charlton. Signed by Phil Parkinson on loan almost 12 years ago we have all seen how much this club means to the ex-skipper. I have many memories of Jacko raging like a crazy man in front of ecstatic Addicks’ fans pumping his chest. You can’t manufacture that shit. Charlton Athletic means a lot to him, as it does us.

Jacko’s name has been sung consistently at recent games as he stood on the touchline next to Nigel Adkins just as culpable, win together, lose together, but you knew he was hurting like the rest of us sat in the seats or sat at home.

It has been a confusing and hard to fathom blur of a start to the season. Finally a steady hand on the tiller, yet a calamity on the field. Seriously, how many black cats have you run over recently?

Although let’s run over a few tomorrow 😀 (see what I did there?).

What is needed next is, well, of course the spawn of Pep Guardiola, but baby steps. What we need now is a guiding light, someone able to paint a simple but progressive picture of how to play and give blood, sweat and tears whilst wearing the shirt. Some pride, some solidarity, some bloody basic defending.

Sunderland is a little bit of a free hit, and Jacko has basically had a day and half and a long train journey up north to get his own ideas across.

The result is less important to me tomorrow than the performance. That is everything to me. Show that we can plant and grow an identity. We haven’t had one for a long time.

A year after Jacko first played for Charlton, Chris Powell became the manager, and I felt a little yesterday and in fact more so today like I did then.

I wrote then that “my heart aches with undying joy but also trepidation but I know more than anything else that Chris Powell’s heart has Charlton Athletic Football Club running through it like a stick of rock.”

I have hopes and fears for Jacko, but what I really have is the fire back in my belly. Sing as loud as you can tomorrow those that are going to the game. COYR.