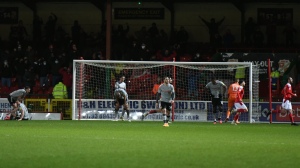 Haven’t learnt a thing have we.

That’s four points dropped in injury time in the least two away games against teams at the bottom. You know 4 points come the end of the season will matter. Leading up to the Leeds game at the end of last season how many last minute conceded goals did we mull over in our heads.

Fine lines, but so needless, so frustrating. We weren’t great, weren’t particularly at the races, but we were better and had the better chances. The negative tactics to defend a lead against inferior opposition is becoming very irksome.

I was following the game via phone walking around Sarasota with periodic stops for coffee, and the 2nd half moved quite quickly to 90 minutes after Aneke had given us the lead.

I checked Twitter. 90 mins. We sound as if we are needlessly hanging on. Swindon corner. I switch off. Another glug of coffee. Two phone messages followed instantly. I didn’t need to check the score, I knew.

How to make a lovely sunny walking morning turn sour, god they make you grumpy don’t they.

Why take off midfielders for defenders. We are singularly unable to defend a lead at the present time, and this is not an isolated incident. Why is Oshilaja not starting?

Questions, when the answer seems simple. Yes Lee we could have, should have, would have scored another 9 more, but it does not matter one iota if we retreat further and further into our own penalty as the clock counts down.

Not a good day for Charlton and their London and south-east based fans.

🗯 “Everyone is going to drop points, but this and Shrewsbury now, that’s four points we’ve dropped and it shouldn’t be happening.”
📸 K_AndrewsPhotos
🔜 Plymouth Argyle (h)