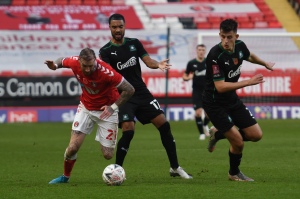 The first time in 11 seasons that we’ve exited the FA Cup in the 1st Round, and only the second time since 1973, but Lee Bowyer didn’t appear to care much, and he made the point in as many words at least, that if the players had cared more we wouldn’t have lost.

Bow was pretty scathing in his post-match press conference about most things – the players who came back in, bar one or two, the amount of games, the “stupid cup” on Tuesday and the international break. Marcus Maddison was given the benefit of doubt but his expectation of the midfielder’s work rate was left in little doubt.

A day to forget then, and sadly another Addicks Cup game which has slowly diminished the excitement I used to feel in my youth.

Bowyer’s argument is that if we can’t win it, then what’s the point, and his winning mentality shone in his pre-match presser if you saw it.

I don’t want us to lose any game, even this coming Tuesday’s absolute waste of time, but this season with no fans at the game, it’s hard to argue that we should make the FA Cup a priority. What would today’s crowd of been anyway? 4,500?

Jephcott got the winner on the hour and although we started well and ended stronger after the introduction of subs, the bit in the middle was mostly forgettable. Only Aneke, Barker and Maynard-Brewer were to get any credit.

So we can now concentrate on the league, and we really can.