The original post was titled Sandhurst School, Catford 65 years ago. I wrote this Blog Post 11 years ago today, and I remember researching it like it was a year ago, not eleven.

65 (actually now 76) years ago last week my old primary school, Sandhurst School in Catford, was shockingly bombed by a German fighter plane, eyewitnesses including my grandmother used to say that the plane was flying so low that you could see the evil in the pilot’s eyes.

When I was there in the 1970’s the air-raid sirens were still situated around the corner from the school. On January 20th, 1943 just after lunch had began the then familair sound of sirens sounded. Some kids made their way to the shelter, a bricked up classroom on the 2nd floor, others ignored it and continued chatting with friends eating their sandwiches. These were young school children, blissfully unaware that a fellow human being would want them dead.

The pilot flew his FW190 Fighter-Bomber down low over Downham Way and the nearby playing fields around midday aimlessly firing bullets at gawping and ducking people below. The pilot then turned his premeditated intentions to his major target, the school situated between Minard and Ardgowan Roads.

Flying at roof level the German pilot flew down the top of Ardgowan Road where my Grandmother, pregnant with my Mum, was like her neighbours drawn to the window of their house to investigate the sound of roaring engines. My late Nan told us the story many times of the determined look in the face of a killer. Other eye witnesses said that the Nazi pilot actually waved to children in the playground before he dropped a 1,100lb on their young innocent heads.

Half of the school building collapsed into a heap of rubble killing 38 children and 6 teachers, most not even having the decency of dying instantly, just suffocating under a collapsed building. More than 60 children and staff were injured, many being plucked from the debris by hundreds of rescuers. For two days people picked through the devastation digging out the casualties. The dead were buried in a mass grave at the nearby Hither Green Cemetery.

The school was originally built in 1896 in response to thousands of new families moving into the new Corbett Estate nearby. Previously farmland a Scottish developer bought 278 acres of land and on a grid system built 3,000 mid to large family homes, still in evidence today north of Catford and stretching into Hither Green.

Corbett’s plan was to attract “hard working and respectable” families into the area and a number of places of worship were also included within his design although trying to get a drink even now is impossible as a covenant still exists precluding any pubs, taverns and inns. 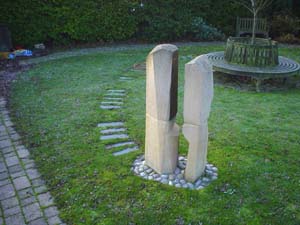 The building half destroyed in 1943 was originally built in 1904 and after being rebuilt in the early 1950’s still exists. 112 (now 123) years on, Sandhurst is still going strong and is home to a nursery, infant and junior schools.

There is a commemorative stained glass window in the infant hall remembering the young children and teachers lost 65 (76 now) years ago plus a recently opened memorial garden (above). I only have happy memories of my time at Sandhurst, it was a wonderful time of my life but an older generation do not have the same memories as me. This story and the loss of innocent children and their teachers should never be forgotten.