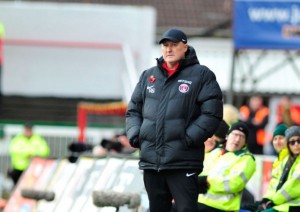 An enjoyble weekend at home for the football, only ruined by the football! I’m only glad that I didn’t waste time watching it on the telly. Oh….

A 200-mile round trip across a very rainy London, the fact that it stopped raining when we reached the magic roundabout was the only highlight of another dismal day of being a Charlton fan. A couple of players out on international duty and our most creative and direct player injured showed up all of Russell Slade’s tactical weaknesses and how glaringly sparse and unbalanced our squad is, with 9 defenders in the 18 man squad!

How bad we were yesterday left me a little shell shocked to be honest. The first half was dreadful, but Swindon at least showed some splashes of intent and had a couple of players that could play the ball well on the ground. Meanwhile all we could do is move the ball sideways and backwards around the back four and eventually hoof it up front to no one in particular. Nicky Ajose attempted to make a fist of a couple of wayward high balls, but as an attacking force we showed no invention and less ambition.

In fact throughout the whole game we had just one shot on target. Novak and Ajose scored 39 goals between them last season yet Slade looks unable to get them playing together or individually to their strengths. I only found out once we got home that Slade had them set up in a diamond formation. I think those of us there were oblivious to that, although it might explain why Novak and Ajose kept being found out wide. Or then again it may not.

Certainly Slade seems unable to affect a game from the sidelines and with his arms either crossed or deep in his tracksuit bottoms, very little obvious inspiration or zest emanates from him.

We lack pace, urgency, purpose and creativity in midfield yet for me there is still enough quality in the squad to make some sort of challenge for the play-off’s. This division is a shadow of what it was last time we were in it, but I really don’t think Slade is up to the job.

I have seen enough games over many generations of footballers to know when players are either unmotivated or uncertain to their roles. Once again we started the game so lethargically. At this level a good coach and manager needs to be able make a silk purse out of a sows ear and make average players better and allow good players a platform to shine. What we have instead is a manager who is defined by caution and negativity.

I haven’t done the analysis but I don’t expect there are many managers or head coaches currently employed in England the same age and experience as Slade , who have never won a promotion or a trophy of any sort. Somehow our Belgian owners managed to find one.

As for the players, this was the first time I had seen them in the flesh this season and it was like watching robots going through the motions. They didn’t play as a team nor as individuals, and absolutely no one stood out. The defensive 4 and midfield 4 were identical. Not in looks, but in the way they played. For an opponent coach we much be so easy to negate, possibly Holmes and Lookman aside.

A young Swindon side meanwhile kept the ball, switched it from flank to flank, and made positive passes into attacking and dangerous positions. A 5-0 win would not have been undeserved, and it was telling that at the end Swindon still showed the hunger to seek more goals, whilst we had given up the ghost.

We had 9 corners, and yes we might have been awarded a penalty, but the game was up well before then. Slade had set the pattern, the players were completely unable to put any stamp on the game and we were not at the races.

Throughout the game protest songs and gallows humour kept an obviously demotivated group of loyal supporters on the edge of interested, and I would expect most would have seen the majority of our games this season. This is a despairing time to be an Addick it really is.

Slade came in for a lot of stick from the away end and the players were not well received at the end when they came over to clap. But at least they did. Slade had already made his way down the tunnel. The most incisive thing he had done since half-time.

He did apologise afterwards and at least he refused to blame the fact that he was shorn of players on international duty. Although in recent weeks only Magennis has been a regular starter. In the press conference Slade put his neck on the line saying that we will see a response in the next game.

Well, if Slade has any ounce of drive and determination then that is the minimum we should expect.