A taste for more 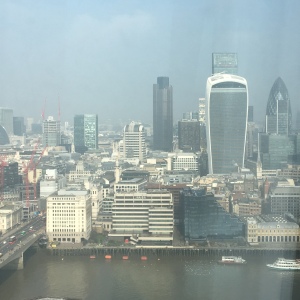 “What is your favourite city” my son asked as we both looked out of a Shard window 33 floors up (photo). A bit of loaded question that, although since I was old enough to explore London on a 36 bus from the bottom of Sandhurst Road in Catford I have always given the same answer.

My Kent-country-living son is a lot less travelled than I was when I was 16, but Saturday with no football was the ideal opportunity to open his curious eyes. Admittedly my Dad and I were never fortunate enough to be in the position to blag ourselves into a posh restaurant with no reservation and a pair of trainers and jeans on, and all the same you’d normally have found us in The Valley Club on a Saturday afternoon.

The Shard is not an easy place to get into, unless you want to part with £30 to go to the viewing gallery. That is as steep as the view, but lunch would have been a nice alternative, but after ringing around each of The Shard’s restaurants the day before I was told they were all fully booked.

Anyway, knowing that restaurants of a certain ilk always keep a couple of seats spare in case Leonardo DiCarpio walks in off the street, probably dressed in trainers and jeans, we chanced our arm, managed to blag our way past three lines of security guards or door attendants, whatever their uniforms allowed them to do, and sure enough we were proffered a couple of seats that came with a glorious view of the world’s greatest city and lunch was superb at Oblix. My son loved it, and hopefully his knowledge of London’s skyline is now better.

One of my favourite London haunts is Borough Market, which is where we headed after The Shard. This atmospheric cornucopia of food smells and tastes is brilliant and he and I loved walking around the market that is said to have originated over 1,000 years ago.

We carried our London expedition along the Thames and had a nose around Shakespeare’s Globe Theatre where we caught a happy wedding crowd, we watched the Millennium Bridge not wobbling and then ducked into the cavernous Tate Modern where we stared often puzzled at the array of artwork. The space here is incredible and we easily lost 90 minutes walking and studying the Tate’s incredible walls of art.

That was it for a day that would normally have been spent watching Charlton, a pursuit that has given both of us many joint memories, but Saturday’s little excursion was also very enduring and reminded me of London’s allure and gave my son a taste, literally, for more.