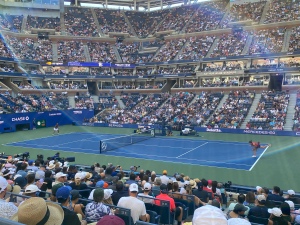 I was in Queens, New York yesterday watching the U.S. Tennis Open. It was a flying visit, one full day, two nights and four Covid tests. We had great seats for Tuesday’s afternoon session and in the first quarter final game watched Danill Medvedev beat outsider Botic Van De Zandschulp, ranked 454 in the world.

The Russian was cruising, but in the 3rd set the Dutchman made a game of it delaying our escape to find some shade. It was a hot day, the sun, motionless above us, was baking hot, thus the famed honey deuces were a necessity for hydration purposes. Medvedev, the no.2 seed eventually won 6-3, 6-0, 4-6, 7-5.

Fernandez celebrated her 19th birthday on Monday and had already beaten past U.S. Open champions Naomi Osaka and Angelique Kerber in the two previous rounds.

This quarter final was a sensational battle and probably the best women’s game I have ever seen live.

The game swung both ways with both players hitting the ball with real zeal. Just as Svitolina looked beaten, she would find it within herself to get back in the game. Fernandez always looked to have the edge though and her sheer exuberance and athleticism had the Arthur Ashe Stadium rocking.

Five times the young Canadian was two points from winning, but failed to win the next point. At 5-5 in the tiebreaker she got lucky with a ball bouncing off the net tape. Svitolona put her hand to her mouth in disbelief and Fernandez won the next two points to move into the semi’s 6-3, 3-6, 7-6.

The U.S. Open has seen the rise of a few characterful and exceptional teenage players, and I would really love to see Fernandez play Emma Radacanu in the women’s final.

The Arthur Ashe Stadium is the Billie Jean King National Tennis Center’s main court, and although not full, was a cavernous bowl of noise yesterday and it was great to once again witness live sport. I was very fortunate to go.

I originally planned to stay until Thursday, but Hurricane Larry appeared in the distance and over the weekend was set to head straight to Bermuda as a CAT 4. At home I have a horrendous reputation for not being on island when big storms hit, so with the storm expected to be here tomorrow like a good boy I flew back today instead.

In fact over the last 48 hours Larry has both slowed and moved eastward, so we will avoid a direct hit and although the surf is already pretty angry and we will be on the receiving end of some strong winds, Larry will be about 200 miles from us when it comes by Thursday afternoon.

Like Loading...
Tags: Hurricane, New York
From: Bermuda, Tennis
← Henderson is back too
Sustainable transfer vision →
No comments yet