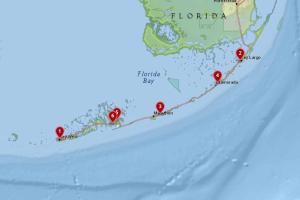 It’s Bermuda Cup Match long weekend, a cricket game that shuts the island down and we don’t have to go to work. Yay. So the choice is going to the game, which I have done many times, camp on the side of the road like the locals do, sit indoors under the a/c, or make use of the bank holiday and get off the island. We’ve done the latter.

We haven’t really left the humid weather behind because we are in Florida, but despite similar heat levels, you never seem too far from proper air conditioning here, so the sweaty uncomfortableness doesn’t seem quite as brutal.

The trip starts on the gulf coast to check in on the long running saga of a house renovation we are doing in Sarasota. I’ll leave that there because the slight mention of it gets me into a embittered temper and a grump.

Anyways, if you’ve never been Sarasota it’s a great town, culturally superior to the rest of the state of Florida, and beautiful to boot. We will be there for a day or so and then drive back across alligator alley to Miami.

For two nights we are going to hang in Coconut Grove, a leafy neighbourhood of Miami that sits along Biscayne Bay. From here we will do a few activities with our daughter, a little shopping and some eating and drinking.

In all my years I have pretty much hit all the high points of Florida. High point as in sights and cities not height. As flat as a pancake I think the highest point in the state is 300 feet. And that may even be a ride at Universal….

One place I have never been is the Keys. The drive down to the bottom, about 160 miles from Miami, can be snarled with traffic. So we are just going to drive halfway down to Marathon, spend a few days there, and probably attempt to do a there and back in a day to Key West, the last of the keys connected by road.

Then the final leg of our sunshine state tour will be back to Miami at the end of next week before returning home.

The problem other than the heat, is being on the road for the first two Addicks games. I thought the season kicked off early, but note it’s the same as last season. Will have to stay close to some WiFi and water.