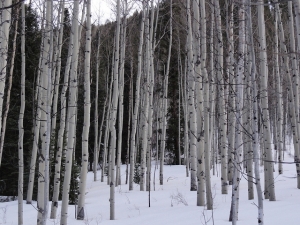 Aspen, aptly named for the Aspen trees filling its mountainsides (those aren’t individual trees but a large connection of roots!), is one of the West’s oldest towns. Booming in the 1800s during the Gold Rush and becoming a ski mountain in the 1940s, Aspen now attracts the outdoor-loving set who hit its mountains for skiing, snowboarding and snowmobiling, as well as summer and fall hiking, biking, whitewater rafting and horseback riding adventures. Located in the Fork Valley, Aspen’s slogan is “the Power of Four” due to its close proximity to Aspen Highlands, Buttermilk and Snowmass Mountains, meaning a trip to Aspen actually gives you access to four mountains of fun.

Aspen Mountain begins at nearly 8,000 feet at its base, climbing to 11,212 feet in height. Known for its ski slopes, 76 trails over 64 miles keep powder lovers occupied from late November through mid-April. However, Aspen is not for the beginner: there are no green trails on this here mountain. Instead, new skiers and boarders will have to traverse the trails at Buttermilk and Snowmass, the two most family-friendly mountains of the four and about a 20 minute drive away. Beware because kids also get bussed to these resorts as there are no ski facilities for children in Aspen.

Unlike many ski villages that dot the Rocky Mountains, Aspen was not created to resemble an Alpine destination. Instead, it honours its history as a Western mining town and you can just imagine cowboys walking it’s intimate main streets lined with brick and stone buildings that have stood their ground for 200 years.

In 1892 Aspen was a booming silver-mining town, with 12,000 inhabitants, six newspapers and an opera house. But the town’s fortunes took a nosedive when the silver price plummeted in 1893, and by the 1930s the population had shrunk to 700 or so, and the handsome Victorian buildings had fallen into disrepair. Development of the ski resort started on a small scale in the late 1930s. The first lift was opened shortly after the Second World War, and Aspen hasn’t looked back.

Aspen gets a lot of snow, around 300 inches a year and plenty of grooming. We were there in early April and the conditions were excellent and the place was empty. The lifts and gondola closed the weekend we left mainly because no one comes, which is a shame as there was still plenty of skiing to be had.

My 18-month daughter and I weren’t skiing, me because of my knee and her because of her height! My powder loving other half was though and she had sent us a host of beautiful photos from her phone, so one morning we deci 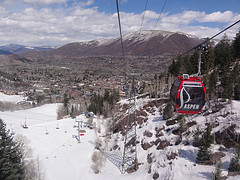 ded to take the Silver Queen Gondola (phot0) to the summit of Aspen Mountain to meet Mum for lunch.

The Gondola was next door to the Little Nell Hotel, which was where we were staying. It took around 25 minutes and she loved it as we travelled 2.5 miles vertically to the top to have lunch in the sun bleached restaurant Sundeck. The panoramic views were incredible.

Aspen’s historic centre – with a typical American grid of streets – has been preserved to form the core of the most fashionable ski town in the Rockies. There’s a huge variety of restaurants, bars, shops and art galleries – some very upmarket and expensive.

The town, although busy, is pedestrian-friendly and allows walkers to slowly meander the charming streets. Beyond the town it is very residential, with a mix of huge houses for the super-rich as well as moe modest accommodation for visitors and workers. There are a few golf courses nearby, the best one being at Snowmass, where there were tennis courts as well.

Although we flew into Vail, which was a 90 minute drive, an option much closer was the tiny Aspen-Pitkin

Airport, which has an extra long runway because it needs it at this altitude. The airport’s elevation is 7,820 feet. Research told me that Telluride Airport in Colorado is the highest airport in the USA at 9,070 feet with Bangda in eastern Tibet the highest in the world at 15,548 feet with a runway 3.5 miles long!

We were in Aspen for my other half’s (whisper it) 40th. On my 40th we went hot-air ballooning in Napa Valley and ballooning here would have been awesome too, and this company can arrange it for you. On the day of my other-half’s birthday I took her dog sledding.

At Krabloonik at the foot of the Snowmass mountain over 200 dogs have been bred and trained to either race competively or run tourists through a 10-mile trail during the winter months in all weathers.

The first bit of the

ride was for the dogs and the musher to navigate a black diamond ski run, that was some start. Then our sled lifted at an angle as we flew around a hair-pin bend with our female, and pretty slight, musher hanging off the sled like a master yachtsman.

The two of us were sat in a sled built on site using just birch wood and elk hide. Wrapped in blankets our female musher worked busily behind and at the side of us steering, pushing, pulling and driving us through peaks and troughs and some incredible scenic snow capped beauty.

Theresa our musher loved her job, and was a wonderful teller of stories and guide book facts too. It didn’t come as any surprise to me later to find out that she was a huge rugby lover. Playing not watching. Three times a day she ran these trails, 10 miles each, 7 days a week. Made me tired just thinking about as I sat there waving to passing elk.

We flew through parts of the White River National Forest marked by millions of tall, bare Aspen trees. It became a bit more sedate after that as we entered this huge ranch, used by thousands of cattle in the summer we were told, and skated along trails and over creeks with the 13,300 ft Mt Daly watching over us. Then came the ‘rollercoaster’ which was superb and finally we got to the half-way point where we could get out and stretch our legs before embarking on the return journey.

Afterwards we took our wind swept faces and wonderful birthday memories to the Krabloonik restaurant for a 4-course meal, which included roasted elk loin and a couple of pints of Ranger IPA. It was a great finish to an exhilerating afternoon.

As I mentioned we stayed in the renowned Little Nell. The hotel was a little too characterless in my mind but it’s functionality worked with the little ‘un, i.e. being a snowball throw from the Gondola, mountain and Aspen 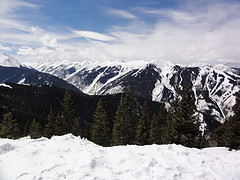 town. The service was pleasant though and we were upgraded to a bigger room with a view not so much of the mountain but just a mass of snow as our room was basically at the foot of it re-defining the expression ski-in, ski-out!

We made good use of the baby-sitting service and went out to dinner a couple of times, other than Krabloonik. Our favourite being Nobu Matsuhisa’s privately owned restaurant (as opposed to being co-owned or where he is executive chef) which was in a Victorian house in the centre of town and has been since 1998. We allowed the extremely knowledgeble waiter (to be fair calling him a waiter was doing him a huge disservice) to chose for us and the flavours were just incredible. It was a bit quiet in there, but it was the end of the season and the food was simply magnificent.

We also gave Pinons a whirl, which was about to close for the season but that was good too and had an inviting menu. For breakfast and I liked Victoria’s for strong coffee and gigantic scones.

I liked Aspen, it had a certain finesse and poise to it and like Stowe in Vermont that we visited last summer, Aspen is a year round resort. However to go to Aspen and not see the majestic snow capped mountains would be a bucket list tick missed.